What most people probably do NOT want – in no country of this world:

And these are the goals the proposed system change of the Global Social Modernity stands for.

However, apart from the political and social will, in our today’s world, with respect to their feasibility and accessibility, most of the above points, or in other words, what the great majority of the people are striving for, are primarily dependent on one specific parameter – the availability of money and monetary income: On the one hand, money/capital derived from income of private households as well as business enterprises to first of all create the related demand for goods and services – in particular money/capital to service this demand, i.e. to finance the respective goods and services, thereby enabling them to be produce and made available; On the other hand, money/capital from tax income (and other income sources of the state) in order for the public sector (the state/the society) to ensure related services and (human) rights including the observance of laws.

The availability of money and capital however is in our today world exclusively dependent on the functioning of a profit oriented and materialistically shaped market economy (creation of income and taxes). The today’s globally accepted system of a market and profit oriented competition economy and its attached social values[1] does however not guarantee any of these goals and desires of humankind – especially with respect to the entire population of our world, and just rudimentary for some social strata in very few countries, and even then only at the expense of people in other countries and parts of the world. To the contrary, our present social and economic system and its order of values are mainly responsible for global social and economic injustice, environmental degradation, latent mass depression of an increasingly stultified materialistic consumer society, and for the development of anachronistic nationalism and radicalism and their consequences such as i.a. violent / armed conflicts and terrorism.

As an important parameter of this contemporary social system the unavailability (in private households in particular) and respectively at times the not making available (by economic groups and to some extent state budgets) of sufficient monetary resources and capital inter alia additionally prevents a potentially more modern, sustainable and peaceful social development as desired by the vast majority of world population.

It is therefore not anymore the question whether or not our entire social fabric has made itself – at all levels of individual and social development – entirely dependent on the factor money and capital; Neither it is whether or not this system is capable of achieving a high standard of living, ecological sustainability, justice, peace and personal happiness for all people in the world. What is fundamental is what conclusion should be drawn from such findings for future worldwide social development.

Wanting to achieve this from a standing start within the context of today’s society, largely shaped completely opposite to this, would be foolishness and doomed to failure. On the contrary, it will need many years and decades of gradual changes and of transition – from social awareness creation to new paradigms that, from today’s perspective, seem to breaking taboos; through many little socio-political stages at national and international levels, along medium and long-term reform projects worldwide. Even if today the goal of achieving a Global Social Modernity (GLOSMO) seems still to lay in a remote future, the realization of some of its stages would already represent an immense progress for the social development on our planet.

The summarized concept towards the Global Social Modernity: 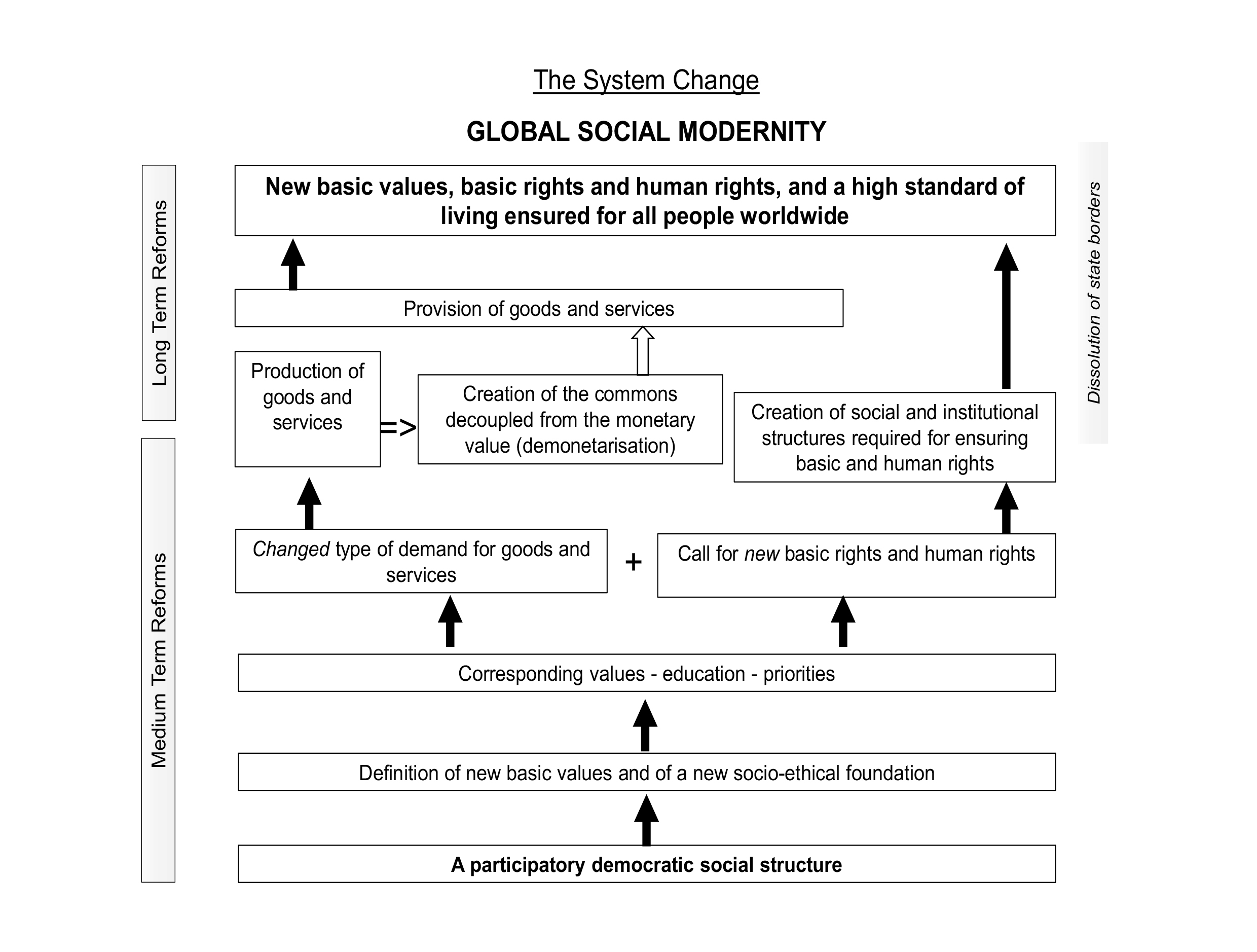 In the below, the route to be followed by an actual, long-term social transition is traced out in summary form. The starting-point and presupposition is the successful realisation of the so-called necessary medium-term reforms at the national and international levels.

National level (if not immediately at the international level, initially for separate states):

Building on this, in the long run the first issue is the gradual transfer to the public domain (that is to society or the community) of the service and production systems assigned to the commons. As a result of the blanket transfer to the public domain of the social and economic sectors of the commons to be created, initially nothing much changes in purely market economic terms. Supply and demand and production costs continue to determine the goods and services on offer, the corresponding profits and losses and wage levels. However, the transfer of these sectors to the public domain makes it possible to estimate the actual (because now value oriented, and not anymore stimulated or suggested) need (demand) for corresponding goods and services of the commons for the given size and type of population, and to adjust or convert the relevant service and production systems accordingly. A – for instance, municipal – Social Administrative Council to be established, which will later become a sub-regional/local part of a global administrative council (of the planetary People’s Congress) once state borders have been dismantled and the corresponding regional planetary administrative zones have been created, would gradually take over the administration of the commons and its separate domains.

Factored across the entire planet, in the globally renewed society to be achieved, there will be a substantial overall reduction in the industrial production of goods in particular, which is in keeping with the need for environmental sustainability and a solidarity-based humane (and no longer material consumerist) social order.

The quantum leap occurs only with the subsequent, gradual uncoupling of the social commons from monetary value as the factor determining its availability – that is, demonetarisation. In order to prevent supply bottlenecks and chaos, this can only be implemented gradually and based on precise local and where necessary regional and global planning (estimation of demand and production needs) in the shape of a worldwide concerted action.

In addition to demonetarisation of the above key sectors and their transfer to the public domain, for the actual creation of a universal standard of living it is also necessary to guarantee corresponding institutional capacities. In accordance with the values and the new ethical foundation of a Globally Renewed Society, the People’s Congress to be established or rather its Administrative Council must not only guarantee the availability of the above-mentioned goods and services but also the perfect functioning inter alia of the education and vocational training system, the information and communications systems, the public health system, science and research, the administration of the energy sector, of natural resources and mineral resources and the protection the genome, of public transportation and the judicial system.

It is important to reiterate that the detailed elaboration and implementation of all hereby-recommended reforms can only emerge from a grassroots democratic process. Thus, only the people themselves can de facto decide upon the System Change.

The objective and result of a successful System Change:

At the end of the social transition – in perhaps one to two generations – the goal aspired to of establishing a Globally Renewed Society on Planet Earth would be accomplished: a modern, forward-looking society which has overcome starvation and poverty, exclusion, envy, hatred and violence, for which wars have become history and which husbands natural resources sustainably; a society whose peoples are committed to the welfare of all strata of global society, which promotes personal solidarity and collective progress, while simultaneously ensuring individually determinable scope for development and realisation within the framework of a corresponding system of values.

[1] Individualism, maximization of consumption and of personal ownership are regarded as the highest values for social development.